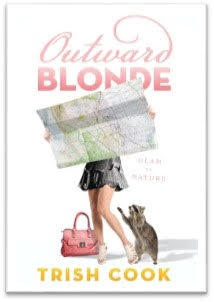 Teen socialite Lizzie Finklestein has all the qualities of a trainwreck in the making.  With a physically absent father, an emotionally absent mother, and an addiction to shopping and hard partying she can’t seem to shake, Lizzie is on a certain path to destruction.  Rock bottom finally comes when one of her public drunken escapades gets caught on camera and shared with gossip sites.

Lizzie’s parents decide it’s time for a change of scenery.  They have her whisked away from her Manhattan penthouse apartment in the middle of the night and dropped at Camp Smiley, a gritty wilderness survival program for troubled teens deep in the Rocky Mountains.  Surrounded by a motley crew of campers all facing their own demons, she’s convinced she has nothing in common with these misfits.

Lizzie must learn to survive in the harsh conditions of the outdoors, including how to dig her own toilet and build a fire by rubbing two sticks together.  Lizzie feels that she’s only left with two options: get with the program, or get out of there.

“You’re not going to believe this, Jem!” I say when
my best friend finally picks up FaceTime. Her cheeks, nose,
chin, and forehead are slathered in one of those masks she uses
whenever she thinks she might be getting a zit. Which never
actually happens. That girl is flawless.
“Try me.” Her lips are barely moving, which means the
mask must be almost dry, which means she’s probably more
interested in peeling than talking right now. That will change
once she hears my news.
“Guess who I just matched with on Tinder?”
Jem’s mouth moves the tiniest bit downward, her attempt
at a frown. She looks just like my mom after a fresh Botoxing:
incapable of any facial expression. “Using an app to find a boy
is kind of pathetic, don’t you think?” she asks.
“Jem, Jem, Jem. You didn’t say the magic word. A girl like
me deserves a real man, not some immature boy.”

“Well, what you’re going to get on Tinder is a real creeper,
Lizzie,” she warns. “And I like partying with you too much to
let you be found all over the city in a bunch of different garbage
bags. Not to mention, I’d be such shit at giving you a
eulogy. One, because I hate public speaking, and two, I
wouldn’t be able to bring up any of our best times together
without giving the adults at your funeral a coronary. So no.”
“You haven’t even seen who it is yet. Pretty sure you’ll think
he’s worth the risk.”
Jem closes her eyes and puts a hand over her heart, adopting
a sweet little voice that’s nothing like her loud normal one.
“What I’ll miss most about my BFF Lizzie Finklestein is
sneaking out with her on school nights, using our never-fail
fakes to get into all the best bars, doing body shots until we
puke, and making out with random college guys who have no
idea we’re still in high school. I’ll never forget the time we
‘borrowed’ her mother’s Benz and almost ran over a group of
Japanese tourists in Times Square. . . .”
I hold my hand up in front of the computer screen. And in
my hand is my phone, which still has the picture of Hot
Tinder Man on it.
“What . . . the . . . FUCK?” Jem is impossible to impress
and I’m pretty sure I’ve finally done it.
“I know, right?” The only thing standing between me and
this guy at the moment is my mom, who doesn’t take her
Ambien until right before she goes to bed. When she zonks
out, I’m sneaking out.
“It’s not really him,” Jem says. “You do know that, don’t you?”
“Everyone knows he’s on Tinder,” I tell her. “And that he likes
his girls younger. We’re perfect for each other. It’s, like, fate.”

“Oh, please.” Jem peels off an inch-wide strip of mask
starting at her chin and ending at her hairline and shakes it at
the screen. “It’s an old, bald, smelly, fat creeper pretending to
be him so he can rape and dismember you.”
“Dismember. Good SAT word, Jem. Mrs. Lemelson would
be so proud,” I say, invoking our prudish, perma-single English
teacher. “But I guarantee you it’s really him. If you don’t believe
it, come to the Standard with me and see for yourself.”
Jem’s peeling like crazy now. “It’s not him, and that fat
smelly old creeper is going to throw you into the Hudson once
he dismembers you. Do you really want to be shark bait?”
“I thought you said he was going to leave me in garbage
bags all over the city?” I tease. “Besides, I’m pretty sure there
are no sharks in the Hudson. And if you were really that worried,
you’d be my wingman.”
Jem strips off the final bit of mask. Her face is a gorgeous
deep caramel again, except for the smallest pink dot you’ve ever
seen on the side of her nose. It’s probably from the colored pens
we used in art class today. She points to the supposed “zit.”
“I can’t be seen in public like this. Activate your Find My
Friends app so I’ll at least be able to tell the cops where some
of your body parts are.”
I shrug. “Okay, but you’re missing out. Because I’m pretty
sure James Franco would be up for a threesome. Just think of
the pictures we’d get pretending we were going to go through
with it—”
“Fake Franco, you mean,” Jem interrupts me.
“He’s the real deal,” I tell my friend, and click the Face-
Time screen down before she can try to convince me some
more he’s not who he says he is. Or worse, decide to come

along and initiate a threesome for real (which she knows I’d
never participate in, leaving her with James Franco all to
herself, and she’s smoking hot so who could blame him, so,
like, no way).
There’s a knock at my door. My mom peeks her head inside
my cavernous room. She peers first at my king-sized canopy
bed, which is currently covered in pillows of every shape and
size but not me. Then she glances over to my dog’s bed where
Poochie—my adorable googly-eyed Shih Tzu with a crooked
underbite—is fast asleep. She’s twitching and smiling and
probably dreaming about bully sticks, her favorite treat. Whoever
decided dried bull dick might be a good dog snack is a
certified psycho, but Poochie is obsessed with it so I guess I’ll
have to keep buying it.
Finally, Mom realizes I’m sitting on my white leather chaise
by the window, like always. My laptop is on my lap, like always.
And I’m not doing my homework, like always. Mom has on a
silky nightgown and robe. That must mean it’s Ambien time.
“You almost ready for bed?” Her eyes are glassy and she’s a
bit wobbly—both sure signs the medicine is already taking
effect.
“Yeah! Don’t you like my pajamas?” I gesture at my crop
top and miniskirt. I hide my high heels under a throw so she’s
less likely to realize the outfit screams “going out” and not
“going nighty-night.”
Mom ignores my clothing and stares straight at my forehead,
where a subtle, stubborn swath of acne has been camped
out since sixth grade. If Jem had my skin issues, she’d never
go out again. Luckily there’s such a thing as cover-up or neither
would I. “Did you remember to put on your prescription
face lotion?”

Figures that even when she can barely focus, all she can see
is my flaws. I don’t reply. She won’t remember my answer in
the morning or that she ever asked anyhow.
Mom mumbles goodnight and shuffles down the long hall
of our penthouse apartment. It takes her forever to get there.
As a little kid, I used to hate the yawning distance between
us. Instead of staying tucked in, I’d make a break for it every
night, jumping as far from the mattress as possible and
sprinting away to be with her and my dad. Warm and safe
between them was the only place I could ever get a decent
night’s sleep. After all, Ursula the Sea Witch didn’t live under
THEIR bed.
So good thing I’m not a little kid who’s scared of an evil
fictional octopus anymore (mostly), since that kind of comfort
isn’t even an option now that my parents are divorced, Dad
went to live out his save-the-world dreams in Africa, and Mom
decided she prefers being in a medicated coma to snuggling.
Even better is that I actually like how far away they are from
me these days. Especially at night. Because you do the math:
divorced dad living in another country + mom’s room being
down an endless hall + her having an anxiety disorder that
requires daily doses of Klonopin x Ambien = me being able
to do whatever and whoever I want to, whenever I want to.
Which, tonight, is none other than James Franco.

This book was a page turning journey that didn't let up for a second. The author's voice was compelling and I enjoyed the read. 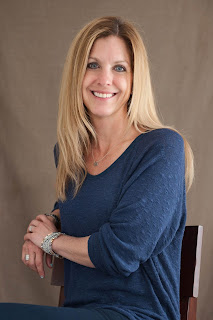 Trish Cook is the author of five young adult novels, including NOTES FROM THE BLENDER, A REALLY AWESOME MESS, and OUTWARD BLONDE coming this October from Adaptive Studios. She is a graduate of the University of Chicago's Graham School program in Creative Nonfiction, and her essays have been seen in the Manifest-Station, Graze Magazine, and Spittoon. In her spare time, she rows with a masters crew, most recently competing in Masters Nationals and the Head of the Charles Regatta. You can find more information at www.trishcook.com and @trixcook on Twitter.
Posted by Unknown at 10:38 PM