The Warrior: Initiation by Rebecca Royce 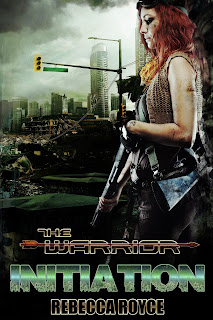 Keep your friends close...and your enemies closer. Rachel Clancy has had to learn the hard way that you can't always trust who you know. Born with a specific set of genes that lets her fight monsters, Rachel has trained her entire life to kill vampires and werewolves. Unprepared for the level of deception and betrayal she faces as she journeys Upwards to battle her enemies, it's not long before Rachel finds herself on a quest that will alter the lives of everyone she knows. Including Rachel's...

Here is a recent review:
Rebecca Royce knocks it out of the park with the first book in The Warrior series. A dystopian tale of earth after Armageddon, after the Werewolves and Vampires have destroyed human civilization and sent humanity into hiding.  For fourty years humans have lived underground.

In this book we meet Rachel Clancy on the eve of her sixteenth birthday.  Turning sixteen is signifcant but not in the way we are accustomed.

Rachel was born with a specific set of genes that designates her as a warrior.  Her childhood has been one of training, preparing to fight the monsters.  On her sixteenth birthday she is sent out on her first mission, alone - scared but determined.

It's the beginning of great change for humans and monsters alike, because Rachel is more than she imagined.  She's the catalyst that will cause dark secrets to be revealed, and hidden truths to rise to the surface.

I'm typically not a fan of books written in first person, but I honestly was captured by page two and could not put the book down.  Ms. Royce has always had a wonderful ability to build worlds that come alive in a reader's mind, and characters who are so well developed their voices ring in our heads.  This, however, is Ms. Royce's flagship.  Her voice rings with vibrancy, the world she has created is so clear we feel we are there.  These characters live and breathe, we feel their emotions and walk along with them as they traverse a dangerous landscape.

I can't give enough praise to this book and cannot wait to read the rest of the series.  It gets my highest recommendation.  This is definitely a must read.  by Lou Jones

It is a Young Adult, Science Fiction, Dystopian