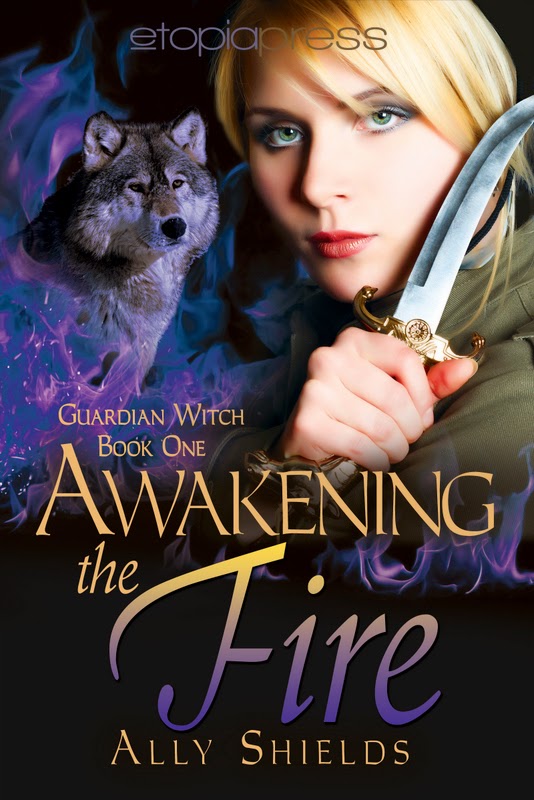 It's her first murder case...
Twenty-three-year-old Ari Calin has sworn to keep the peace in the Olde Town district of Riverdale, and most of the time the Otherworlders cooperate. The vampires, werewolves and other magical creatures go about their business, living side by side with humans, until the foreign wolves arrive and a virtual reality drug hits the streets. Violence erupts, and Ari needs more than her witch fire, weapons, and potions to stop the madness.
Joining forces with a human police officer, Lt. Ryan Foster, and a way-too-sexy vampire singer, Andreas De Luca, Ari hunts for the enemy—from the vampire strip clubs to the caverns under the city. Every step draws Ari and her companions deeper into an old feud and closer to the brink of a supernatural war.

(Despite the friction and mistrust between them, Ari has come to Andreas's supper club to ask for his help on her murder case.)

The vampire's coal-black eyes found her and silken threads of magic wrapped her in a soft web. The room faded away. She floated as in a dream, warm and safe. A place to linger forever. Her witch magic began to sing in concert with his, and Ari called it back to her. The effort brought her out of his web with a jolt.

Damn, how strong was he? She wrapped her magical aura around her. As long as she kept it in place, his magic was held at bay. Then, mercifully, the song was over. Andreas bowed to a wildly applauding audience and left the stage.

“Good evening.” Startled, she stared at him.

“Uh, hello.” How did he move so fast? He produced a polite smile.

“If you will come this way.” He waved a hand toward a hallway on the left.

Ari hesitated. A meeting in private? She hadn’t anticipated that.

His brows rose. “We have twenty minutes.”

Swallowing her doubts, Ari preceded him down the hall. It was better this way, she told herself. Fewer interruptions. At least she knew her time parameters. He ushered her past four closed doors, not stopping until they reached an exit door at the end. He touched a security panel, the door opened, and they stepped into a paved lane leading to the rear parking lot. Dense trees lined the opposite side of the lane. Total privacy.

The night was pleasantly cool. The crisp cleanness of fall filled the air. Ari hung back and watched her companion as he stopped in the middle of the lane. Andreas arched his shoulders and threw back his head, breathing deeply. For a moment all Ari could think about was how sexy he looked.

“I hope you don’t mind talking out here. It has been a long evening, and I needed the fresh air.”

“Not at all. It’s nice.” She looked up at the stars, pinpoints in an uncluttered sky, to keep from looking at him. “What was that last song you sang?”

“An Italian love song. Did you enjoy it?”

He turned to look at her. “It was, or I was?” His voice invited a broader interpretation.

She smiled. “Both,” she said, not bothering to hedge. “But who’s fishing for compliments now?”

Where Books Lead Us
wherebooksleadus.blogspot.com
Review

2.      April 27th
Taking it One Book At A Time
http://takingitonebookatatime.blgospot.com
Review

I love Ally Shield's voice and this book kept me reading long into the night. I am clutching my e-reader with sheer happiness at the character development, wit and and potential for this series. It's hot and smexy and I can't wait for more!

Ally Shields grew up in the Midwest, taught school on the East Coast, has visited forty-two of our states, and currently resides near Des Moines, Iowa, with her miniature pinscher, Ranger. Writing has always been a part of her life, and in late 2008, after  a career in law and juvenile justice, she turned to full-time fiction writing. Her first urban fantasy novel, Awakening the Fire, was published in 2012, followed by six additional books in the series. She loves to travel in the US and abroad and incorporates many of those settings into her books. Ally enjoys talking with readers and is active in social media.