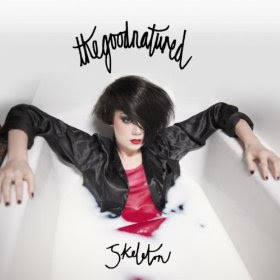 Release: October 25, 2011
Available: Amazon.com, iTunes
The Good Natured are a British electropop band that had their first EP Warriors out in 2008. This album got a great deal of press and from there, the band's second release Your Body Is A Machine (2009) was signed by Parlophone. Now in October of 2011, they are releasing their much awaited album, Skeleton.The band consists of Sarah McIntosh (vocals, keyboards), Hamish McIntosh (bass) and George Hinton (drums).
"Wolves" is a high energy mix of electopop keyboard action, playful drums, creative riffs and Sarah's magnetic voice. The lyrics play with dark and the light to weave a Gothic tale of suspense both in word and sound. This piece enraptured me and I wanted to hear more.
"Hourglass" is haunting and thought provoking. Lyrics spin around you as keyboard, bass and percussion weave a spell you simply don't want to break. Sarah's voice holds a duality of crushed velvet and steel. This album would be at home in a Goth club or on your favorite alternative playlist.
With every track on the album, you have the mysterious element that is so dark and compelling about Goth music, but you also have the electricity of pop that doesn't allow this band to stay in just one genre. I for one am putting this album on my wishlist.
What I liked:
Every track was amazing. Usually you have one or two that are not quite what you are looking for. This is not the case here. The Good Natured have outdone themselves with this CD.
What I didn't:
I wish it was longer. At 23:45 minutes, I found myself spinning the album more than once, but trust me when I say, that was not a problem.
Overall:
5/5
This album is up there on my favorite new band list and I look forward to hearing the next release from this talented group of musicians. Their combination of the dark Goth feel and the energy of a pop song really makes Skeleton a must have album. I highly recommend it.
Posted by Unknown at 12:43 AM

Email ThisBlogThis!Share to TwitterShare to FacebookShare to Pinterest
Labels: The Good Natured