And the awesome giveaway is: 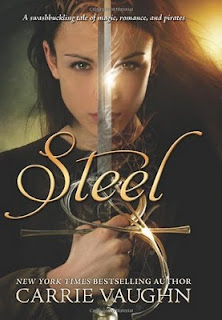 It was a slender length of rusted steel, tapered to a point at one end and jagged at the other, as if it had broken. A thousand people would step over it and think it trash, but not her.
This was the tip of a rapier.

Sixteen-year-old Jill has fought in dozens of fencing tournaments, but she has never held a sharpened blade. When she finds a corroded sword piece on a Caribbean beach, she is instantly intrigued and pockets it as her own personal treasure.
The broken tip holds secrets, though, and it transports Jill through time to the deck of a pirate ship. Stranded in the past and surrounded by strangers, she is forced to sign on as crew. But a pirate's life is bloody and brief, and as Jill learns about the dark magic that brought her there, she forms a desperate scheme to get home—one that risks everything in a duel to the death with a villainous pirate captain.
Time travel, swordplay, and romance combine in an original high-seas adventure from New York Times bestseller Carrie Vaughn (Goodreads)

I don't know about you, but I would love to win this amazing book!
Posted by Unknown at 8:14 AM