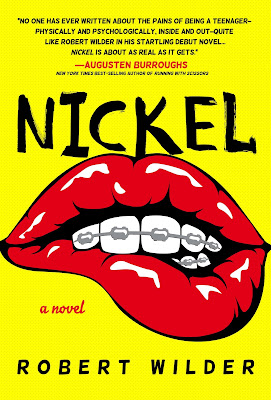 A STORY OF LOVE, LOSS AND LOYALTY. Being a teenager is hard enough without your mother in rehab and your slightly inept stepfather doing his best not to screw things up. But at least, Coy has Monroe. Coy is a quirky teenage boy and his best friend Monroe is a girl who is just as odd and funny and obsessed with 80’s culture as he is. So when Monroe comes down with a mysterious illness, his inner turmoil only grows. As Monroe gets sicker and Coy gets a girlfriend from another social crowd, the balance tips and Coy has to figure out how not to give up on his friend, his family, or himself. Nickel is a hilarious, heartbreaking and honest portrayal of the complicated world of being a teenager today.“No one has ever written about the pains of being a teenager–physically and psychologically, inside and out–quite like Robert Wilder in his startling debut novel. He has created indelible characters in Monroe and Coy–funny and sad and strong and broken–and NICKEL is about as real as it gets.–AUGUSTEN BURROUGHS, New York Times best-selling author of Running With Scissors

“I loved this novel for its humor and pathos, for its honesty and accuracy about what it means to live in our world. Nickel features a heartbreaking set of circumstances, yet its narrator never loses his essential charm as a young man ready to find hilarity even in the direst of dark times. The first thing I wanted to do was recommend the book to everybody.”
–ANTONYA NELSON, award-winning author of Funny Once, Talking in Bed, and Bound

“I have never read anything that captures the teenage mind quite like Robert Wilder’s funny and brilliantly honest book, or encountered a narrator more vivid and memorable. I advise you to buy two copies of Nickel; one to read over and over again and one to give away.”
–NATALIE GOLDBERG, author of Writing Down the Bones, and The Great Spring

“Funny, suspenseful, and alive with the most vivid adolescent characters you’ll ever read, Nickel is a wonderful novel and Rob Wilder is a masterful writer.”
–ROBERT BOSWELL, award-winning author of Tumbledown, The Heyday of the Insensitive Bastards, Crooked Hearts, and Mystery Ride

“Compassionate, frightening and funny, this is a terrific book. With seeming ease Wilder gets precisely the ironic detachment and surface sophistication of today’s youth culture while delving straight into the heart of adolescence, its fragile emotions, its awkwardness, uncertainty and ancient fears.  Despite my initial hesitations about diving back into the isolating terrors of high school and of serious illness, I was immediately won over by this author’s keen insight, his rare ability with language, his leavening humor and–using all of these in tandem–his power to convince.”
–DAVID SMALL, author/illustrator and Caldecott Award winner for So You Want To Be President?, and The Gardener, plus two-time National Book Award Finalist for Stitches, and The Underneath

“Robert Wilder’s Nickel is a feisty, fantastically gripping story. The novel is a funny, frank, heartbreaking portrait of adolescence, which the author knows all too well as the most emotionally intense period of anyone’s life. This is doubly true for Wilder’s Coy, a smartass but deeply bruised nonconformist grappling with illness and threat all around him. I haven’t read a teenage narrator this well-drawn, this vexingly captivating since Salinger!”
–CLAIRE VAYE WATKINS, award-winning author of Gold Fame Citrus, and Battleborn

“This funny, sad, and tender novel sweeps us effortlessly into the land of sectarian cliques and conspiracies—high school. We learn, as if for the first time, that some of us get acquainted with incalculably dark knowledge too soon. Like Lorrie Moore’s Who Will Run the Frog Hospital, Rob Wilder’s novel reminds us that adolescent best friendships are the purest form of love. And the site of purest heartbreak too.”
–DEBRA MONROE,  award-winning author of My Unsentimental Education, On the Outskirts of Normal, and The Source of Trouble 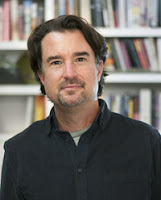 About the Author
Robert Wilder is the author of two critically acclaimed essay collections, Tales From The Teachers’ Lounge and Daddy Needs A Drink, both published by Delacorte Press. His YA novel, Nickel, will be published September 2016 by Leaf Storm Press.A teacher for more than twenty-five years, he has earned numerous awards and fellowships, including the inaugural Innovations in Reading Prize by the National Book Foundation. He has published essays in Newsweek, Details, Salon, Parenting, Creative Nonfiction, plus numerous anthologies and has been a commentator for NPR’s Morning Edition. Wilder lives in Santa Fe, NM.

GIVEAWAY:
a Rafflecopter giveaway
Posted by Unknown at 3:30 AM