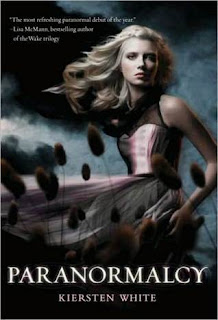 Evie’s always thought of herself as a normal teenager, even though she works for the International Paranormal Containment Agency, her ex-boyfriend is a faerie, she’s falling for a shape-shifter, and she’s the only person who can see through paranormals’ glamours.
But Evie’s about to realize that she may very well be at the center of a dark faerie prophecy promising destruction to all paranormal creatures.
So much for normal. (Goodreads)

I enjoyed this book and am eagerly awaiting the second book coming out this summer. August 2011 we will get the second installment in Evie's story. 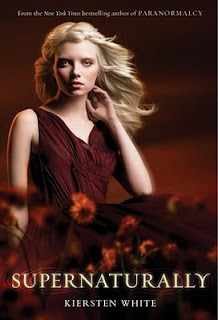 A lot has changed in the six months since Evie escaped from the International Paranormal Containment Agency with her shape-shifter boyfriend, Lend. She finally has the blissfully normal life she’s always dreamed of, including:
1) A real live high school
2) A perfectly ordinary after-school job
3) Her very own locker (and by the way, rusted metal is every bit as awesome as she imagined)

But Evie’s not-so-normal past keeps creeping up on her...and things get pretty complicated when you factor in:
1) A centuries-old, seriously decaying vampire stalker
2) A crazy faerie ex-boyfriend who is the perpetual bearer of really bad news
3) A major battle brewing between the faerie courts where the prize in question happens to be...Evie herself.

So much for normal. (Goodreads)