The Fall of Gadie Series: Lark's End The Virtual Tour 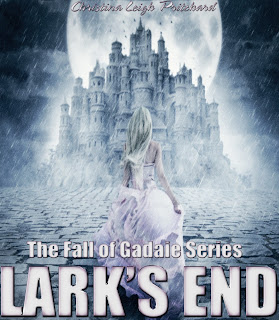 From the author of the C I N Series, comes an epic fantasy world filled with nothing but constant action and adventure. A new world, new life forms, and another twisted and complex story from author Christina Leigh Pritchard!

Mary wants to kill them. But, someone stands in her way...

Tahmi has nightmares of an old man in a sailor's suit, dropping her off, on her doorstep. When she tells her parents about him they look sick. Could her dream have some truth to it? Is that old man the reason they won't allow her in the woods behind their house?

What are they hiding from her? Who is she?

Lark’s End, is the first of eight books in the epic fantasy series The Fall of Gadaie. For extras, (characters, illustrations, book trailers, maps) please visit the blog dedicated to the series: www.gadaie.com

Christina Leigh Pritchard was born and raised in South Florida. Her first stories were written at the age of nine in $0.15 wide ruled spiral notebooks (which were supposed to be used for class) ;o)~ and in the various diaries she kept. Stories she wrote from age nine to twelve fill about four storage boxes!

Her main aspirations in life are: her dog, Teacup; the beach, writing and well, writing! The author says, "I breathe novels.”