Book Description:
Who knew kissing a corpse would change everything?

Death always hits Xylia Morana too close to home, but she likes it that way. She hangs out with the terminally ill, attends random funerals, and every so often, when the weather is right, she sleeps in open graves.

But after Landon Phoenix, the high school hottie, dies in Xylia's arms, she sneaks into the morgue to say goodbye. How could she know stealing a kiss from his corpse would wake him up?

With Landon returned to the living and suddenly interested in Xylia, life has new meaning. But what Xylia doesn't realize is that by kissing Landon back to life, she's thrown Life and Death off balance. The underworld demands a body, and it might just have to be Xylia's this time. 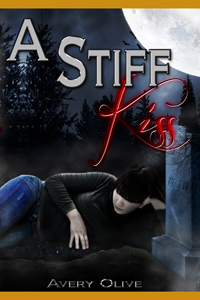 No way should I be in the morgue. If I'm caught, I'll lose my job. My dad will probably get fired, too. He's been warned to keep me out of here.

The walls are lined with thick, square doors, clearly marked with numbers. I stop in front of the one I want. In the middle of that wall, at waist height, is number twelve. Beyond the door, lying on a sliding metal table, is the body of Landon Phoenix.

I've always had a crush on Landon, ever since freshman year when his family moved to Silver Springs. I've watched him grow into his looks, no longer a gangly boy with braces. And I've longed to hear my name roll off his tongue in that deep voice of his. To press my lips against his as he holds me in a tight embrace. To share the same air as him.

Though now, all those things are impossible. Except one. I can pull open the door, slide the table out, and at least for a moment I can share the same air, even though his lungs can no longer pull in that air.

I hesitate, my hand on the handle. Besides my mother, this will be the only other person who's died that I've really known. The others have just been people, random ones at that. The guy from the grocery store who jumped off Whibley Bridge into the icy waters below, the occasional patient of mine who'd succumbed to old age, and many, many others. But this is personal. This is someone I'd known. Or at least, someone I'd held secretly in my heart.
But I need to say goodbye.


Today I’ve decided to let my characters, Landon and Xylia, from A Stiff Kiss do the talking. They’ve come up with some questions to ask each other without giving too much away. I’ve given them strict rules of not giving any spoilers!
So, Xylia and Landon, the floor is all yours...

Since it’s courtesy to allow ladies to go first, Xylia you can have the first question.

Thanks, Landon. Very kind of you. I have to ask, how come you only noticed me after I brought you back to life?

Wow, you sure know how to make a guy squirm. Let’s be honest here, shall we. I totally, without a doubt, noticed you before you brought me back to life. How could I not, I mean you’ve got these amazing green eyes and silky, long black hair, and that body... There was just always, sort of, something in the way.

Right. Be she’s out of the picture now. My turn. If you had to pick a song for us, describing our situation over the course of our novel, what would be it be?

Easy. Nothing Else Matters by Metallica. It describes everything perfectly.
You sure look proud of yourself but you’re right. That song totally rocks. Our first kiss was... different. Okay, sort of gross. What was going through your head when you decided to kiss a dead guy? I mean, not that I’m not grateful, because I am... but really, a dead guy?

It’s not like a planned on it! It just... sort of happened. You looked so peaceful—
I was dead.
You were, but you still looked peaceful. Like Sleeping Handsome, and something just sort of came over me, like I had to kiss you, like my life and yours depended on saying goodbye with a peck on the lips.

That’s sweet, but you still kissed a dead guy.

You weren’t really dead. So it doesn’t count. What’s your favourite scene from the novel?

You mean besides having a total hottie kissing my dead lips? Seeing you as you. I think part of what I noticed before I died was how closed off you were. So, all those times when you were simply being you, not caring about who was looking or how you were acting. You were just free. Did you have any regrets?
About kissing a dead guy? No, not so much. About how I treated my dad in the novel, yeah, I’m still feeling pretty bad about how childish I was. I don’t think I noticed how much of a brat I was being until it was almost too late. But things are good now. We’ve both forgiven each other!

Yeah, I totally scared the crap out of my Moms with that little stunt we pulled—
Shh! No spoilers!

Right, sorry. Okay, so if I was totally rich and could take you anywhere in the world, where would we go?

Transylvania, of course! I have to know if Dracula is real and I bet they have some awesome creepy cemeteries to check out.

You know, I still think I have creepy crawlies crawling inside my brain from the last time you wanted me to explore a cemetery.

You do not! Bugs don’t craw inside your ears. That’s just silly. But if Transylvania isn’t your cup of tea, and clearly, judging by how you screamed like a girl... *cough* Anyways, where would you go if you a tons of money and could take us anywhere?

Venice. I don’t think there’s anything more romantic than taking a gondola ride along the canals.

Sure. Unless of course boat rides make you queasy. Then again, I’ve never been on a boat, so, who knows, we could be pretty safe. So, where do you see yourself in, oh, say, five years?

Well, since soccer is sort of out of the picture. I’m thinking... teacher. It’d be the best of both worlds. I could teach soccer instead of play it and well, I could corrupt the minds of young children. How about you? Is medical school in your future?

Maybe. It’s too soon to tell. I wouldn’t be a doctor doctor, like my dad. I think I’d lean more towards therapist. I’d like to help kids with similar problems like I had.

You mean, the kissing dead people thing? ‘Cause, yeah, I think anyone that does that needs therapy, for sure!

Are you ever going to get over that? I SAVED your life! I kissed you and brought you back. You wouldn’t be here if it wasn’t for me!
Oh, c’mon, it’s funny.

No, what’s funny is getting dumped after doing... you know... in the janitors closet. You know what that says about your... uh... performance, right?
Oh, that’s low. Charity dumping me had nothing to do with that. Alright, I think we’ve got time for one more question. What do you say, Xylia, you wanna give the readers out there a hint about what are novel is about?
That’s not really a question, but sure. If you like sleeping beauty tales with a slightly morbid twist, well, our novel A Stiff Kiss is for you! Because, you better believe, kissing that corpse changed my life in more ways than I can count.

You do know that a Stiff... is, well... Anyways, the Stiff is me, and yup, I get kissed and come back to life. There’s some creepy stuff, and some romantic stuff and some totally weird stuff. I’d say it’s a pretty well rounded novel.
Well rounded it is. So pick up your copy today! It’s available in e-formats and paperback.

You sound like an infomercial, you know that, right? You don’t want to be pushy. Let those readers come to us.

Right. Come to us readers! And thanks, for sticking around and reading Landon’s answers, which weren’t near as good as mine.

They were just as good as yours and you still kissed a dead guy!

Alright, alright, that’s enough from you two. Thanks so much for playing along. And Landon, leave Xylia alone. Would you rather her run around kissing other guys? ‘Cause she’s right, the only reason you’re in the novel, A Stiff Kiss is because she kissed you. I’m sure I could go back and rewrite a few things if you can’t handle the responsibility.

It better be, because without you the novel would just be me, running around kissing other guys and hanging out in cemeteries... hey, wait, that sounds pretty good, Avery? Maybe we should do a rewrite...

No rewrites. I like the story just the way it is! You two better just play nice or maybe *gasp* I’ll just write a sequel and take away your happily ever after.  Uh huh. That’s what I thought. So, to mimic what Xylia’s already said, thanks so much for stopping by!

If you are looking for a story that is just different enough to grab your attention then this is it.

Paranormal and full of twists that will set your e-reader on overdrive, this story was one that I could not put down. Xylia is a character that is sweet and quirky and has a real penchant for getting into trouble. Add to that a real draw toward the dead and you have a recipe for disaster...or maybe resurrection. Or, perhaps a little of both.

I have fallen in love with the sheer originality of this story. As someone with a fascination with death myself, Xylia's fascination seems perfectly natural to me. Well, except for kissing a dead guy. That one was weird-but it worked! You can't blame her. Landon is pretty hot...

So, you will have to excuse me while I go back to my reading. Time for some pumpkin egg nog and the last couple of chapters of this book. If you enjoy an original paranormal story, give this one a try. You'll love it as much as I do. 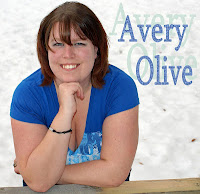 Avery Olive is proudly Canadian. She is married, and when she’s not helping raise her very energetic and inquisitive son, she can be found working on her latest novel-where she devilishly adds U's into every word she can.
When she is looking for a break Avery enjoys cake decorating, losing herself in a good book, or heading out to the lake to go camping.

The release of Avery's first novel proves to her it won't be the last. As long as her family continues to be supportive, she can find the time, and people want to read, Avery will keep on writing.

a Rafflecopter giveaway
Posted by Unknown at 1:30 AM