The Revenge Artist by Philip Hoy 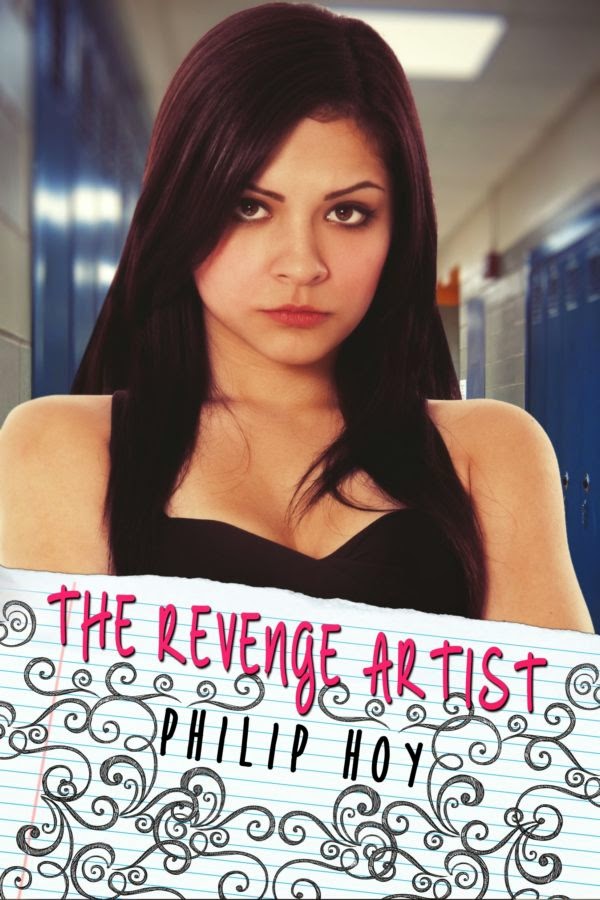 The Revenge Artist by Philip Hoy

Blurb:
A bullied teen embarks on a dark journey of revenge when she discovers the power to make bad things happen by drawing them.

Evelyn Hernandez is a high school junior who reads Shakespeare for fun, sews her own dresses, and keeps a sketch journal of her daily life. When varsity quarterback Garvey Valenzuela breaks her heart, she sends him to the emergency room with a busted hand.
Add black magic to her résumé.

The Revenge Artist is the story of a bullied teen who embarks on a dark journey of revenge when she discovers she has the power to make bad things happen by drawing them. The novel explores the emotional pain, isolation, and self-hatred caused by bullying and cyber-bullying in particular as it follows the self-destructive path taken by one teen attempting to defend herself from bullies.

Evelyn is temporarily empowered by her ability to hurt others, "Don't you know? I'm a witch... a real, honest to God, black-hearted, evil witch!" and this is what keeps her from seeing that her true power comes from her loyal and caring nature, the love and support of her friends and family, and most of all, her intelligence and creativity.

Dana’s YA Book Pile Author Interview Questions:
1.   I write because…
I am a sponge. I soak up everything around me, from home, from my students, from the media, from books, until I reach a point of saturation and I must wring myself out onto the page. If I can’t find time to write…if I don’t make myself…then all of that input evaporates, and all those possible stories dry up and disappear. And wringing is really an appropriate image, because writing is difficult and almost never flows easily, but all of these influences are in the mix and what I think emerges is something I can call my voice, the same voice with which I speak, only far more polished.

2. If I were your favorite cookie, what would I be?
I would be the sugar cookies my wife makes during the holidays. I’m a light, crispy-crunch blonde with golden brown edges, filled with a buttery deliciousness that’s not overly sweet. You can keep a small pile of me nearby to nibble on while you are reading or writing, or you can put a handful of me in your coat pocket and take me with you to the movies, shopping, or wherever.

3. Plotter or pantster?
I imagine I’m a little bit of both. I work best with a rough outline, so I talk myself through the plot: first, next, later, finally, the next day, and so on, and then go back and write it. These are two very different things, though. The first is mostly planning, but the second is creating…and creating is the most difficult. You can plot and plot and plot some more, but sooner or later, you have to switch over from planning to constructing, and then submerge yourself in the world you are creating, and begin to write from the point of view of your characters. In other words, stop telling what your characters will do and start showing them do it. Once I begin writing, I guess I’m a pantster. I place the characters within the conflict and then see what happens. Even though I’m pretty sure I know what my character will do in a situation, I have to start writing in order to find out. Dialogue can be especially surprising. I may have certain lines in mind, things that must be said to develop the characters and the plot, but once two or more characters begin to speak, the conversation often takes on a natural, spontaneous rhythm that makes unexpected turns and arrives in unexplored territory. Writing can be as much an act of discovery as reading…sometimes maybe more.

4. What is your favorite type of character to write about and why?
I am attracted to characters that tend to drastically underestimate themselves. Characters who, for some reason or another, temporarily become their own worst enemies until they realize the strength they needed, or the answer they were looking for, was inside them all along.
Mostly, my high school students inspire my writing. My characters are teenagers. And like my students, they are just as much discovering themselves, as they are inventing themselves: still finding their voices, still realizing their powers, and still exploring their purpose in the world. In my novel, the high school dean complains, “You kids live in the extreme, in the moment, and why not when everything is happening to you for the first time?” I feel this is so true of young people; although, unlike the dean in my story, I believe this is exactly what makes teenagers so fascinating and so refreshing to be around.

6. Name three things on your desk.
Right now? My MacBook Pro, the hand-carved Maori wooden face my daughter brought back from New Zealand for me, and a bowl of oatmeal, my favorite late night snack.

7. What books have influenced your writing style?
While I don’t think my style is necessarily similar to any of these writers, when I think of my choice to write for a young adult audience, these particular books come to mind: The House on Mango Street by Sandra Cisneros, The Afterlife by Gary Soto, The Dead Father’s Club by Matt Haig, Speak by Laurie Halse Anderson, and The Perks of Being a Wallflower by Stephen Chbosky.

8. Tell us a little about your book.
The book is called The Revenge Artist and it is the story of Evelyn Hernandez, a bullied teen who discovers she has the power to make bad things happen by drawing them. The novel explores the emotional pain, isolation, and self-hatred caused by bullying and cyber-bullying in particular as it follows the self-destructive path taken by one teen attempting to defend herself from bullies.
Although there is a bit of the supernatural, or paranormal, in my book, it is categorized as a contemporary young adult novel. There is definitely romance, but the plot is much more concerned with the protagonist finding her voice than finding her man.

9. What advice do you have for new and aspiring authors?
Once you’ve finished that first book, begin submitting it to as many publishers and agents as possible. While you are awaiting responses, start writing your next story (never stop writing). If you are lucky, out of all the “no thank you” replies, maybe, just maybe, a publisher will include some notes along with your rejection letter. And even though specific criticism of your book may hurt a lot more at first than a generic, “it’s just not what we’re looking for at this time,” do not destroy or delete this letter…it is extremely valuable and rare. Later, after you’ve had a good cry, take it out and read it again. Chances are, it’s advice you can use.

10. What is next on your writerly horizon?
I’ve decided to write a sequel to The Revenge Artist and I’m already half finished. Also, I’ve begun an author’s blog on my website that I really enjoy.

Hi, I'm Garvey."
Evelyn looked up at him through her bangs. "Evelyn," she said without lifting her head. But his hand stayed outstretched between them for an unbearably long moment until Evelyn finally gave him hers.
"Nice to meet you, Evelyn," he said with two perfect dimples framing his smile.
She turned and smiled at the other two guys now sitting at the table. Garvey followed her gaze and greeted the two with a smooth lift of his chin and some kind of half audible guy-grunt which they returned in a similar manner. Tito and Erick. The two were inseparable. Must be nice to get to sit with your best friend, Evelyn thought as she twisted around in her chair to make eye contact with Denise who had ended up on the other side of the classroom. Evelyn gave her a please-kill-me look. Denise just smirked and rolled her eyes.
"Hey, I have a cousin named Evelyn," Garvey was saying. "We're not related are we?"
Evelyn turned back to face him. "No."
"Are you sure? She likes to wear dresses too, just like you. You know with tights or whatever." He made a motion with his eyes like he was looking through the table top at her pink stockings.
She instinctively pulled her knees together.
"Have you ever done that?" he went on, leaning a little forward. "You know, liked someone and then found out they were related, your cousin or something?"
"No."
Oh...My...God, she prayed silently, please stop talking to me. Schwartz made an exaggerated clearing of his throat to get everyone's attention. "Okay!" he said, "Now that you've all had time to get to know each other, when I call on you I would like you to tell me three things you've learned about the person across from you." The class became noisy again. "Evelyn," he announced loudly over the din, and everyone stopped talking and turned to look at her.
Perfect, she thought, how can this day possibly get any worse?
"Stand please," added Schwartz. "Nice and loud."
Evelyn stood, tugging down on the hem of her dress. "His name is Garvey," she said, and then in one monotone breath finished with, "he plays football, and even though sports and school keep him very busy, he still finds time to keep in touch with friends and exchange pictures on Facebook."
Garvey looked confused.
"Okay, that's two things," said Schwartz. "One more."
"His name doesn't count?" asked Evelyn.
"No, that's too easy," he answered, obviously enjoying himself. "One more...something most people probably don't know about Garvey."
Evelyn sent Schwartz daggers with her eyes. He knows I can't answer that, she thought, he knows I wasn't even speaking to him. But when she opened her mouth it just came out. "He once had a crush on a girl until he found out she was his cousin," she said and dropped into her seat.
Someone laughed abruptly, like the bleat of a sheep.
"Oh...kay..." said Schwartz. "Garvey, what did you learn about Evelyn?"
"Well, her name is—" He stopped himself, remembering to stand up.
Evelyn slipped lower in her seat.
"Her name is Evelyn," he went on, "she's an artist and..."
Now it was Evelyn's turn to look confused.
"And she's always drawing pictures in a notebook she carries around."
Schwartz was nodding his head slowly, counting to himself while Garvey spoke. He stopped now, looking at Garvey expectantly.
"And...she likes to wear pretty girl's dresses to school because she wants to be original and have her own style."
He sat down again, flashing Evelyn his trademark smile.
"Okay, thank you Evelyn and Garvey for setting the standard with those introductions," Schwartz continued. "Now let's hear from someone in the back of the room." 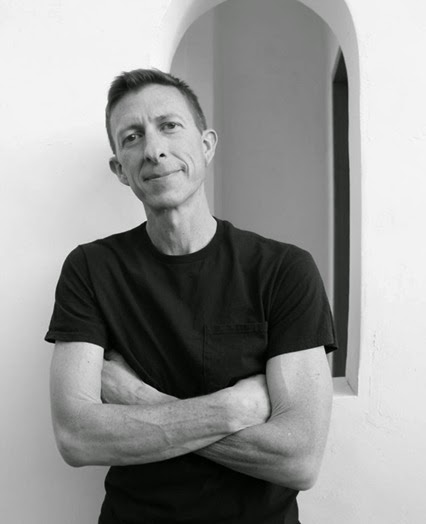 Philip Hoy is a high school English teacher. When he is not creating lesson plans or grading essays, he is writing. He lives in Southern California with his wife Magdalena, also a teacher.
Posted by Unknown at 12:30 AM