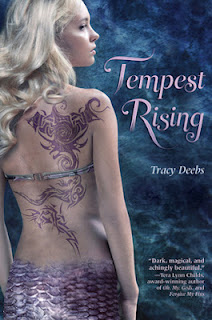 Tempest Maguire wants nothing more than to surf the killer waves near her California home; continue her steady relationship with her boyfriend, Mark; and take care of her brothers and surfer dad. But Tempest is half mermaid, and as her seventeenth birthday approaches, she will have to decide whether to remain on land or give herself to the ocean like her mother. The pull of the water becomes as insistent as her attraction to Kai, a gorgeous surfer whose uncanny abilities hint at an otherworldly identity as well. And when Tempest does finally give in to the water's temptation and enters a fantastical underwater world, she finds that a larger destiny awaits her-and that the entire ocean's future hangs in the balance. Tempest Maguire is happy with her decision to embrace her mermaid nature and live among her mother’s clan within the ocean’s depths. Even though training to one day ascend the throne for the aging mermaid queen is rigorous, she finds refuge in the arms of Kona, the selkie who first opened her up to her mermaid side. But when word comes that one of her brothers has been gravely injured on land, Tempest immediately rushes to his side—which also brings her back to her old flame, Mark. And in her absence, a deadly battle begins raging at the hands of Tempest’s old nemesis, the sea witch Tiamat. As the dangerous war erupts, Tempest’s two loves—Kona and Mark, sea and land—will collide for the first time, both to protect her and to force her to choose.

Mermaid stories are what summer is all about! These two books are in my digital to be read pile and look like lots of fun!

I hope you are all having a wonderful summer! Leave me a comment and tell me what you are reading...