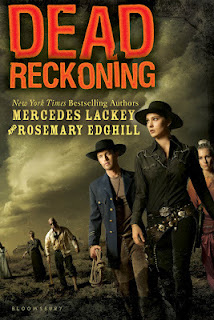 Jett is a girl disguised as a boy, living as a gambler in the old West as she searches for her long-lost brother. Honoria Gibbons is a smart, self-sufficient young woman who also happens to be a fabulous inventor. Both young women travel the prairie alone – until they are brought together by a zombie invasion! As Jett and Honoria investigate, they soon learn that these zombies aren’t rising from the dead of their own accord … but who would want an undead army? And why? This gunslinging, hair-raising, zombie western mashup is perfect for fans of Cowboys vs. Aliens and Pride & Prejudice & Zombies.

This book is perfect for anyone who loves zombies and westerns. An original take on a genre that has had many great authors, this book has adventure and some nice zombie hordes running amok.


Now for an interview with these two amazing authors!
Rosemary Edghill: Hi, Dana, and thanks for having me (and my lovely and talented co-author) as your guests.

Q: How did you decide to combine zombies and a western?

Rosemary Edghill: It was totally a case of "what's the most improbable thing that can go here?"  DEAD RECKONING is completely about improbability: the gunslinger is really a Southern Belle, the prim bluestocking is really a mad scientist….

Mercedes Lackey: Well, we wanted to do something different.  There's plenty of contemporary YA horror/monster/occult fiction out there, but not too much that's set in a historical period (though A Great and Terrible Beauty does spring to mind.  Rosemary and I both like westerns, and it's an interesting period, a time and place where things were unsettled in every sense of the word, so almost anything could happen, and a time when there just isn't the sort of fast information transfer and communications we are so used to, so it's absolutely right for something nasty to come out of the woodwork that the reader will recognize but the characters won't.  As for zombies, well, we wanted to focus on Jett, Gibbons and White Fox, so we picked antagonists who are quite literally mindless.  And yet, at the end, you can feel sorry for them.

Q: What are some of your favorite zombie books and films?

ML: Oddly I am not a big zombie fan.  I do like the very cheesy Bela Lugosi White Zombie, and I'm a fan of Sean of the Dead.

Q: The main character has tried to maintain that she is a boy at the beginning of the book. What inspired your story line?

RE: The whole idea of someone dressing as a member of the opposite sex is one of my big favorites, and it was more common in real life history than you'd think.  Basically, I wanted Jett to have all the cool fun of being a gunslinger, and I wanted her to be a girl, too.  Presto!

Q:When you are not behind the keyboard, what are some of your favorite things to do?

RE: ::laughs::  Sleep!  Also, one of my furkids is a licensed Therapy Dog, meaning I can take him into hospitals and nursing homes and schools and so on, so when I'm AFK, you'll find me on the end of a leash…

ML: Play my favorite MMORPG, City of Heroes, and work on outfits and painting my collection of resin Asian Ball Jointed Dolls.  I actually have two collections, my Secret World Chronicles superheroes (who get to wear contemporary clothing as well as spandex and armor) and my Elven Court, which has some adorable little anthros in it as well as elves.
Q: If the world were to suddenly go into a zombie apocalypse, what three things could you not live without?

RE: Well, one of them is the internet, so I see a big problem already.  But aside from the stuff needed to survive the zombie apocalypse and fight zombies (a long list right there!), I'd want my computer, my dogs, and a lifetime supply of Mtn Dew…

ML: A way of generating electricity, a clean water source, and a reliable food supply.  Terribly practical, I know.  Actually rather than taking over a mall, in the event of a zombie apocalypse, our plan is to take over the local WalMart warehouse.  It's actually got its own power supply, there are no windows, there are few doors and those are easily barricaded, and it has virtually everything you would need to survive, right there.  While everyone else will be looting the malls and stand-alone stores, we'll have more than enough to supply us.  Can you tell we've actually thought about this?

Q: What are some of your stranger writing habits?

RE: I, um, may have a special writing hat that I can't write unless I'm wearing…

ML: There's generally a parrot on the back of my chair or on my arm.  Or, occasionally, trying to cuddle into my neck.  And I can't write without my Ganesh doll, my gryphon "sea-opal" carving, my Companion Cube, my beckoning cat, and my Commie Unicorn on the desk.

7. What one thing would you tell a prospective writer?


ML: Don't talk about it, do it.  Write at least an hour a day, every day, no matter what.  Turn it into an addiction, one you feel bad about when you don't do it.

Q: Do you have a playlist for the book?

RE: Usually, I just take one song and put it on endless repeat (see: "strange writing habits") while I write.  I once wrote three books to Blue Oyster Cult's "Don't Fear The Reaper", and since this was pre iTunes in my world, I actually wore out four CDs.  For DEAD RECKONING, I actually rotated through several songs: Loreena McKennitt's "Night Ride Across The Caucasus", "Run Through The Jungle" by Creedence Clearwater Revival, and a number of classic Western movie themes: How The West Was Won, The Good The Bad And The Ugly, Hang 'Em High… and the theme from the original Wild Wild West, of course!

ML: Some classic western soundtracks.  The Cowboys, How The West Was Won, Dances With Wolves, that sort of thing.

Q: Do you outline or are you a panster?

RE: Outline all the way!  It's the only way to really make a collaboration work, if you ask me…

ML: The only way to do a collaboration like this is to outline, but I am an outliner all the way.  That said, if the book wants to deviate from the outline, I rewrite the outline.

Q:  What is your next writing project?


ML: The next Valdemar book, the next Secret World Chronicles book, the last Shadow Grail book, the last Elvenbane book.  I generally work on several projects at once, it keeps me from ever suffering from writer's block.

Thanks ladies for the excellent interview!

Check out more titles from Bloomsbury.
Posted by Unknown at 3:00 AM