Out Tomorrow! City of Fallen Angels 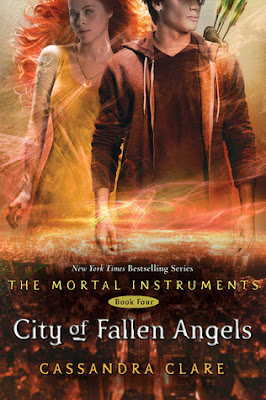 City of Fallen Angels is the fourth book in the bestselling series The Mortal Instruments.
“City of Fallen Angels takes place two months after the events of City of Glass. In it, a mysterious someone’s killing the Shadowhunters who used to be in Valentine’s Circle and displaying their bodies around New York City in a manner designed to provoke hostility between Downworlders and Shadowhunters, leaving tensions running high in the city and disrupting Clary’s plan to lead as normal a life as she can — training to be a Shadowhunter, and pursuing her relationship with Jace. As Jace and Clary delve into the issue of the murdered Shadowhunters, they discover a mystery that has deeply personal consequences for them — consequences that may strengthen their relationship, or rip it apart forever. Meanwhile, internecine warfare among vampires is tearing the Downworld community apart, and only Simon — the Daylighter who everyone wants on their side — can decide the outcome; too bad he wants nothing to do with Downworld politics. Love, blood, betrayal and revenge: the stakes are higher than ever in City of Fallen Angels.”Goodreads

It is out tomorrow! Run, don't walk to your nearest bookstore!
Posted by Unknown at 11:45 PM

Email ThisBlogThis!Share to TwitterShare to FacebookShare to Pinterest
Labels: City of Fallen Angels