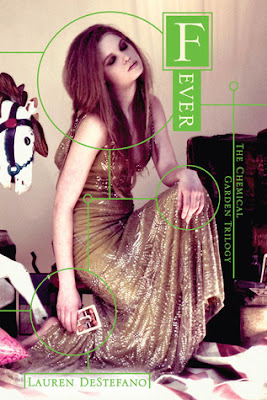 Rhine and Gabriel have escaped the mansion, but danger is never far behind.


Running away brings Rhine and Gabriel right into a trap, in the form of a twisted carnival whose ringmistress keeps watch over a menagerie of girls. Just as Rhine uncovers what plans await her, her fortune turns again. With Gabriel at her side, Rhine travels through an environment as grim as the one she left a year ago - surroundings that mirror her own feelings of fear and hopelessness.


The two are determined to get to Manhattan, to relative safety with Rhine’s twin brother, Rowan. But the road there is long and perilous - and in a world where young women only live to age twenty and young men die at twenty-five, time is precious. Worse still, they can’t seem to elude Rhine’s father-in-law, Vaughn, who is determined to bring Rhine back to the mansion...by any means necessary.


In the sequel to Lauren DeStefano’s harrowing Wither, Rhine must decide if freedom is worth the price - now that she has more to lose than ever.

The Chemical Garden Trilogy is a great dystopian world with characters put into harrowing situations that not many of us would know what to do with. Imagine a genetic disorder that kills before you reach adulthood, forcing girls into marriage arrangements to keep the human race alive until the scientists can discover what is killing everyone off by the age of 25. Enslaved by her circumstances, Rhine, the main character takes her life in her hands when she tries to escape to find her twin brother.
While the start to the book was a little slower than I would have liked, it quickly ramped up and was a roller coaster ride through the perils of a carnival devoted to prostitution and Rhine's search for her brother and the illness that takes her over. The end of the book (no spoilers here!) was a cliff hanger that had me letting out a howl and threatening to hold my breath for book three.
4.5/5
What I liked:
The story development is good. You don't know which direction it is going and I like that. Rhine is a sympathetic character and you can't help but feel for her as she fights to maintain choices in a world where girls are only valued as property and for their body. The suspense building is stellar and by the end I was turning pages faster than my fingers could work.
**Many thanks to the publisher for sending me a copy of this great book. I liked it so much I ended up buying it for my Nook and iPad e-book collection.
What I didn't:
The beginning was a little slow and it was a little frustrating to watch  the drug addiction portion of the book. Story wise, it makes sense to keep the characters subdued this way (with drugs) but I was chomping at the bit for them to move to another part of the story. Also having the hero half dead from addiction was not as romantic as I would have liked-but this is dystopian fiction. Things are rarely ever perfect, so it does fit. It just frustrated me at the time.
Overall:
I think this book is a great continuation of The Chemical Garden Trilogy and well worth the read. Book three can't come quick enough.
Posted by Unknown at 11:05 AM