An Interview with Ashley Knight 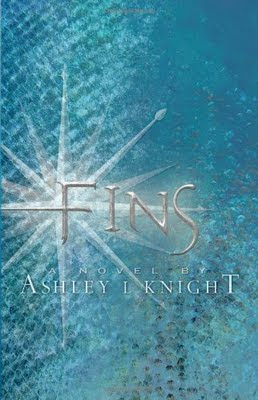 For those of you following my mermaid series here on Dana's YA Bookpile, you may remember my review of Fins by Ashley Knight. A wonderful author and an awesome book, Ashley has agreed to a short interview about her work and a little about her next book. Here we go...
D. How did you get interested in mermaids?
A. My Mum made me watch Splash! when I was 5 & I've been obsessed ever since. I've breathed unintentionally three times while underwater & am thoroughly convinced I AM a mermaid & just don't know how to phase.
D. Do you base your characters on real life people?
A. Not all of them, no. Thayde is very similar to my husband. Élan (oddly enough) is very much like me & Morgan's voice & thoughts are mine. The rest are all from my imagination, unless I specifically make a note of it in the acknowledgement section. For instance, there's a character in FATHOM, the sequel to FINS, named Jacob Mac, who is named after a friend of mine in high school named Mac. He was several grades ahead of me & was so kind & gracious to everyone. With his permission, I named the character after him.

D. How long did it take you to write Fins?
A. 6 months - 1 month of procrastination = 5 actual months of writing
D. I loved the interior decorating scenes with the Florida house. Where did you get your ideas from? I want a mermaid bathtub now! Oh, and the way you described the rooms and her mother's clothes...wow.
A.Many of my ideas came from how I would want my house on the edge of the sea, how I would want my pool, how I wanted my bed when I was little (Naira's room). I did grab my Pottery Barn catalog once & took a few ideas from a living room I liked, but that's about it.
D. What advice would you give to aspiring writers out there?
A. Don't put off tomorrow what can be done today. Write everything down & don't throw anything away because one day you'll use it!
D. Do you balance your writing around another job?
A. I'm a stay at home Mum, so I write when the 2 year old naps, is playing with the 6 year old, or when they're both in bed. Other than that I'm going 100 mph! I drop dead from time to time, but like a zombie, I rise again!!
D. What is your writing day like?
A. It depends - sometimes I go for weeks without writing & then it's as if a tidal wave hits me & I have to write or I'll lose it. I'll write for hours on end. I lost 12 pounds with FATHOM because that's all I did. So my writing days vary. Today I'm sitting at my desk, the third book, FOREVER, is pulled up on my pink laptop, & I'm looking very becoming in my brown sweat pants & matching gray woolen socks & sweater! I am the very essence of sexy!
D.. Do you listen to music while you write?
A. Most of the time I find it distracts me. When I'm writing intently, I can't have it on, but if I'm trying to get the ol' wheels turning it, can be inspirational.
D. Is there a playlist for Fins?
A.  Yes! If you go to my website, you can check them out. It's www.ashleylknight.com
D. Do you anticipate a trilogy for Fins?
A. Yes, FINS was always intended to be a trilogy.
D. What is the next book going to be?
A. It's called FATHOM & it's being released in the end of this month!! (May)
D.. Do you have any strange habits when you write? Weird foods, stuffed monkey hanging from your chair...
A. Not that I'm aware of - other than the crazed mad scientist frenzy I fly into when the ideas hit me - children are shoved aside, the cat goes flying, dogs nails scratch the wooden floors in a futile attempt to get out of my way...that sort of thing. But no, nothing really strange no...
D. What is the main thing you want readers to take away from your book?
A. For FINS - I just wanted my readers to enjoy the read - get involved with the characters, connect with them, care. I wanted them to be swept away into another world for a while. If they were, then I did my job!
With FATHOM, I delved much deeper, but I'll have to save that information for FATHOM's interview.

D. Who did the beautiful cover work for FINS?
A. The artist's name is Ken Koeberlein. He is a native of Idaho & a friend. I've asked him to design all my book covers. He's an incredibly gifted artist & his work inspires me. His website is: www.koeberdesigns.com
A huge thanks to Ashley for coming over to talk to us for a while. If you haven't read Fins  you should find a copy quick. A great book with some great mermaid story action. Don't forget to watch for this month's release of Fathom.
﻿
Posted by Unknown at 10:32 AM

Email ThisBlogThis!Share to TwitterShare to FacebookShare to Pinterest
Labels: An Interview with Ashley Knight